KentCreates.com Featured in City of Kent 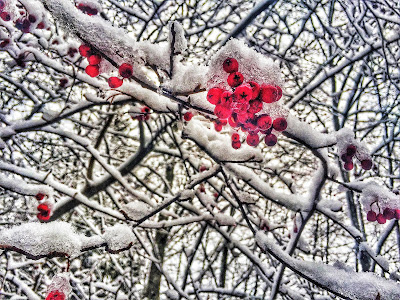 My photograph "Snow Berries" was featured on the City of Kent art website KentCreates.com

Five chosen for ‘Holiday Traditions’ entries
The Kent Arts Commission announced the winners of the most recent exhibit on Kent Creates, the web platform for sharing art, culture and creative endeavors.
The “Holiday Traditions” exhibit asked the community to share fall and winter holiday traditions. The exhibit was open October through December and received 33 submissions, including paintings, photographs, drawings and a song.
The commission voted on submissions and, in keeping with its commitment to pay artists for their work, the top five pieces receive $200 honorariums. The winners’ work also appears on the featured carousel on the Kent Creates homepage.
The five winners from the “Holiday Traditions” Exhibit were:
Rob Kneisler “Homeless for the Holidays” (song), Michael Eggers “Snow Berries” (photograph), Joan Stuart Ross “Oysters for New Year’s” (encaustic on wood and panel), Erica Peto “Angels” (photograph) and Sheldon Ickes “Winter Night” (acrylic painting).
The entire exhibit, as well as the five winning pieces, can be viewed at KentCreates.com.
Kneisler is a Kent-based songwriter. He performs solo and as a member of The Whateverly Brothers, a maritime trio with a wide range of musical styles. Eggers is a visual artist that uses photography, sculpture and painting to express himself.
Seattle-based artist Ross studied at the Boston Museum of Fine Arts, Connecticut College and Yale. After earning degrees at the University of Iowa, Ross moved to Seattle in 1968. She has exhibited her art at Seattle Art Museum and many regional galleries, as well as nationally and internationally. Peto is a Kent teacher by day, artist by night (and weekends and holidays), who loves to paint, draw, draw digitally into her computer, do scratchboard and sew quilts. Ickes is another Kent-based artist. He is known for both drawing and painting.
Kent Creates is a community of imagination and inspiration for anyone who creates or seeks to be inspired by creativity. Creative work of all kinds may be shared on KentCreates.com. Kent Creates is free to use and anyone can sign up; there is no requirement to live in Kent.
Email Post