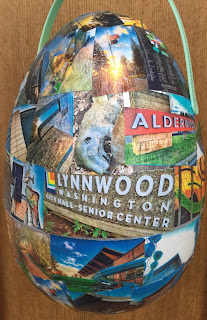 Thank you to the City of Lynnwood Arts Commission for the opportunity to participate in the EGGS-plore Lynnwood Egg Hunt. The EGG is comprised of 39 photographs of various landmarks to show off the great attributes of the city of Lynnwood. Landmarks, parks, artwork, and architecture are the backbone of this city. Can you name all of the locations?

You must sign in or register to continue reading content.
Need some EGGS-tra incentive to get out and explore a local community?
Check out EGGS-plore Lynnwood — an event geared to explorers of all ages.
Ten-inch tall plastic eggs, decorated with creative designs by local artists, are on display at 28 locations around the city.
Explorers can pursue the egg hunt either with an phone app or with a map available at Lynnwood City Hall.
Participants are told the general location of the eggs — such as the Edmonds School District’s administration complex or the Lynnwood Library — but they still have to spot them.
Once found, explorers click on the phone app to register it or circle it on the paper map.

One of the plastic, 10-inch eggs on display during EGGS-plore Lynnwood.
Participants don’t get to keep the designer eggs. They will be auctioned off in June with all the money distributed back to local nonprofits.
But explorers can qualify for prizes — everything from entry tickets for six to Lynnwood Bowl and Skate to dinner for six with wine at the Lynnwood Convention Center.
The idea for the egg hunt came from Fred Wong, a coordinator in the city’s Parks, Recreation and Cultural Arts Department.
He said he wanted an activity that people of all ages could participate in, that would familiarize people with the community and would “do some social good as well.”
“We have all these human service organizations in Lynnwood that a lot of people don’t even know about,” he said.
He said he hopes that as people look for the eggs at stops like Goodwill or Clothes for Kids, which provides free children’s clothing to qualified families, they will learn a little about what these organizations do for the community as well.

One of the plastic, 10-inch eggs on display during EGGS-plore Lynnwood.
The event began March 4 and continues through May 6. Wong said he’s seen kids out looking for the eggs with Dad on his day off, grandparents hunting with their grandkids, as well as adult sister siblings.
“A lot of people are having fun doing this,” Wong said.
Each egg cost about $200 to produce. The city received a grant of $4,000 from the Washington State Arts Commission to pay artists for their creations. Several artists decided to donate their work instead of being paid.
One of the artists, Brooke Fotheringham, of Seattle, decorated an egg made out of silvery aluminum pieces to look like scales on the egg.
“I was playing around with the idea of dragon eggs from ‘Game of Thrones,’ ” she said. “It was so fun to make.”
Another artist, Mark Ostheller, of Everett, produced an egg with a black background and intricate dot mandala design.
“It’s pretty delicate,” he said. “The mandala pattern on the bottom has about 4,000 dots.”
If you’re wondering, there is an historic connection between Lynnwood and eggs.
In the 1920s, the city was home to a lot of small family farms. “We were the second largest egg producing region in the United States,” Wong said.
“So that was basically the idea,” he said, “to have artists create the eggs and put them out for the community to find.”
Happy hunting!
Sharon Salyer: 425-339-3486 or salyer@heraldnet.com.
If you go
An app to get credit for spotting the artistic eggs is at www.EggsLynnwood.com. Or pick up a paper map at the Lynnwood Recreation Center, 18900 44th Ave. W.
Participants can post comments or pics at www.facebook.com/events/171653170295859.
March 4-May 6: Citywide egg hunt
May 8-June 19: Exhibit at Lynnwood City Hall of the artist-created eggs
June 14: Artist reception and egg auction 6:30 to 8:30 p.m. at Lynnwood City Hall

One of the plastic, 10-inch eggs on display during EGGS-plore Lynnwood.

E-Wallet permits you to purchase a credit block to view content on a per visit basis. Each time you log in to view content, the daily amount for that day is deducted from your account balance. When your balance reaches zero, you can purchase additional credit for additional viewing.

Term subscriptions are traditional subscriptions that are purchased for a length of time, such as one month or one year, and permit you to access online content during that time period.


Purchase Date:
Your credit card will be charged $.